The Dead Sea by Train and Bus

Train travel in Israel has its limits, unfortunately. But before judging too fast, be aware that the state of Israel has only existed for a relatively short period of time and also, that a lot of effort has been made and is still being made, to expand the train network. Therefore, plenty of destinations can not or can only partially be reached by train, but we like to think of them as being not rail-able just yet. This is the last out of three articles about great places to visit in Israel, that are reachable by sustainable public transport, and hopefully by train soon. Read below, how to travel the dead sea by train and bus.

The dead sea with En Bokek, Masada and Ein Gedi is undoubtedly one of Israel’s most popular travel destinations, perhaps because it is the deepest accessible place on earth with more than 430m below sea level. Instead of ‘dead sea’, one could also call it a ‘dead lake’, since it has split from the mediterranean sea several million years ago. Due to constant evaporation ever since, salt accounts for about one third of its content. This is why you can almost weightlessly float on the water, which is said to have a healing effect, just like the air, that is enriched with salt. Thus, a day by the dead sea will not only be a lot of fun, but also a low-cost spa experience.

Pro Tip: The high salinity of the dead sea water also has its downsides. If you get it into your eyes or into wounds (or even recently shaved parts), it will start to burn badly. Eyes should be rinsed with clear water immediately. Additionally, the sand as well as small water puddles outside the sea can heat up rapidly with temperatures even exceeding 40°C. Thus, do not forget sun protection and sandals! 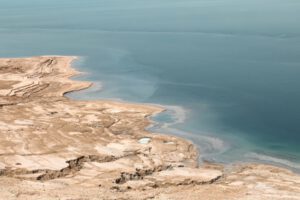 Even though a non-stop journey to the dead sea by train is not possible yet, a combination of train and bus is very convenient as follows:

Trains in Israel run frequently and they are not only reliable but also reasonably priced. Departing from all the main train stations in Tel Aviv – Tel Aviv University, Savidor Centre, HaShalom and HaHagana -, trains to Jerusalem Nitzhak Navon take about half an hour.

Masada is located more northern than En Bokek and can easily be reached with the bus lines no. 384, 444 and 486. A ride from En Bokek takes about 20 minutes.

When travelling to Ein Gedi, there are different options. You can either travel to the Kibbutz Ein Gedi (‘Ein Gedi Center’), where campsites, restaurants and more can be found, or you can travel to the ‘Ein Gedi Field School’, which is closer to the entrance of the national park. One ride from En Bokek takes between 45 minutes and an hour. Both destinations in Ein Gedi can be reached with the bus lines no. 384, 444 and 486.

Masada as well as Ein Gedi can also be reached directly from Jerusalem with the bus lines no. 444 and 486. The busses are operated by Egged and the schedules as well as prices can be found on their website.

Now that you know how to reach the dead sea by train and bus, here are some more recommendations on what to do in the area.

En Bokek is one of the best places for travellers to get a great spa experience at the dead sea. Besides plenty of hotels, health resorts, restaurants and shops, there’s a very long section of the beach, which is guarded and equipped with toilets and showers.

Pro Tip: The dead sea mineral mud is essential for a spa day in En Bokek. Even though it cannot be found there, it can be bought in almost every shop. The mud is applied onto the skin and after everything is all dried up, you just wash it off in the water. 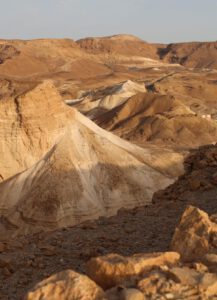 The archaeological site Masada is located on the borderline between the deserts mountains to the west and the valley of the dead sea towards the east. The roman fort, which has even offered a public pool to its inhabitants back in the days, was built more than 2000 years ago and its remains can be visited today.

Additionally, the view from Masada is great to either direction with the mountains on one and the dead sea on the other side. From the entrance near the bus stop, you can take the snake path all the way up or alternatively ascent and/or descent with the cable car. The hike takes 30 – 60 minutes and water bottles can be refilled at the top.

Pro Tip: Due to the far-reaching eastbound view, Masada is a popular travel destination for sunrises. The efforts on the snake path are certainly more bearable before the sun hits. So go on, early birds: in summer, the sun rises at 5:30 am. 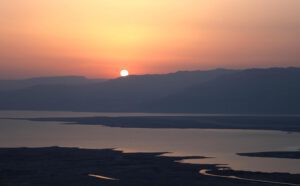 Masada is one of the Israelian national parks. The opening hours and entrance fees are as follows:

Prices and opening hours may vary. The latest information can be found on the national park’s website. 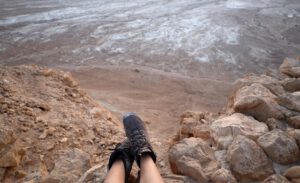 In Ein Gedi, one of the country’s most beautiful national parks awaits, with desert landscapes, mountains, waterfalls, natural pools, caves, forests and more. On a relatively small area, you will have plenty of experiences and impressions. The vendors at the ticket counter will surely recommend a great route that is suitable for your endurance, the time as well as the heat.

Pro Tip: It is possible to swim and refresh in the national park’s pools, so don’t forget to take swimsuits and a lot of water for drinking. In some of the pools above the large waterfall, you can also turn the smooth surface of the surrounding stones into a great water slide – good fun for the whole family. 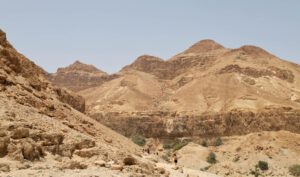 Just like Masada, Ein Gedi is an Israeli national park with opening hours and entrance fees:

Prices and opening hours may vary. The latest information can be found on the national park’s website. 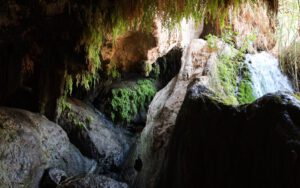 Would you like to travel further and discover more destinations in Israel? Have a look at our previous bus&rail articles about Eilat and the Red Canyons or Mitzpe Ramon. If you like this post, feel free to share it on social media and tag us. We’re looking forward to hearing from your adventures!

The Dead Sea by Train and Bus Train travel in Israel has its limits, unfortunately. But before judging too fast,...
Read More > 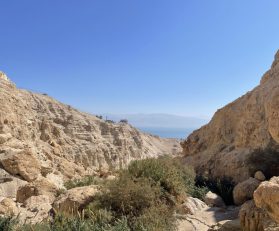 Ein Gedi - A Paradise in the Desert

Those who travel to the Dead Sea with IsraelRail usually spend a night in Ein Gedi. This choice may seem...
Read More > 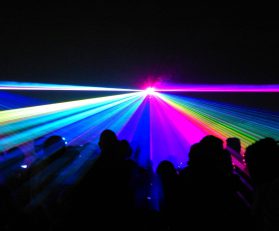 The fun doesn’t end when the sun goes down. Round off your experience of Israel’s most popular sites with an...
Read More > 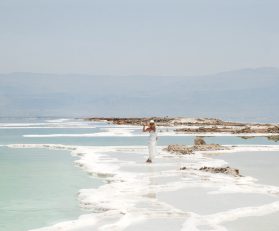 WAYS TO VISIT MASADA AND THE DEAD SEA

How to organize your day trip to Masada and the Dead Sea One of the most emblematic pictures of a...
Read More > 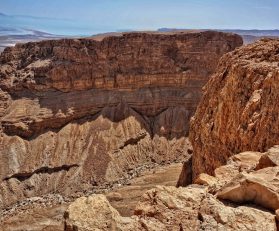 For such a small country, Israel is blessed with beauty, nature and incredible sights in abundance. Get a real feel for the...
Read More >